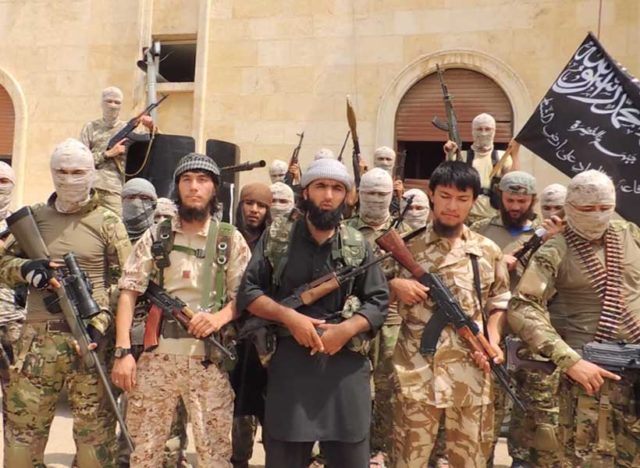 In the wake of 21th century, jihadists shattered throughout globe had been unified under the new brand name: Al-Qaeda. It was acknowledged as a representative organization practically by all Sunni rebel groups of its time. Every single of jihadist organization that were functioning prior to 9/11 acts have at least partial affiliations with Al-Qaeda. Not only had Al-Qaeda reached the zenith of its influence in the light of such connections, but also, this strategy entailed its decline and may possibly lead to its fragmentation in the future.

Al-Qaeda has always been a loosely unified, but not a truly unitary organization even during its peak. Historically, such loose unifications have been formed to counter more formidable enemy, whose defeat is impossible by the single military entity, which was the case with Xiognu-Han conflicts. Like Al-Qaeda, Xiognu constituted the loose confederacy of different ethnic groups and tribes, all of whom shared the single common military-political objective:  countering imperial Chinese dynasties.  The advantage of such confederacies is that it is beyond practical possibility to achieve their complete elimination.  Han Chinese, despite their military superiority, was not able to eradicate the confederacy of steppe nomads due to geographical barriers, such as vast deserts and harsh climate where nomads had inhabited.

Al-Qaeda’s advantage , though not geographic, is a demographic one, because it takes the main support and recruits from undeveloped or radicalized Muslim majority countries. Thus, it is impossible to eliminate Al-Qaeda or at least its ideology in a short-term. Chinese have built the Great Wall to stop the Xiognu. But, this approach turned out to be of catastrophic, which has cost Chinese their sovereignty after their defeat at the hands of Xiognu leader, Modu Chanyu.  In 16th century, only after the establishment of logistical and transportation systems across the Gobi desert, where the vast majority of steppe tribes were living, nomadic threat against China was absolutely gone. Similarly, in order to achieve the elimination of Al-Qaeda, first and foremost, its ideology should be defeated, not with the Great Wall of easily refutable religious propaganda in which Al-Qaeda has deep expertise, but, actually, with alternative ideologies based on comprehensive and logically well-structured arguments, such as secularism.

To point out Al-Qaeda’s the drawback, regardless of their common ideology or political objectives, such loose alliances will be prone to fragmentation and internal turmoil after a heavy blow or severe retaliation is inflicted on them by a superior or more formidable foe. It can be epitomized by the fragmentation of Xiognu confederacy after Han-Xiognu wars during the reign of Emperor Wu. Similarly, Al-Qaeda’s excommunication against ISIS can be traced back to its war against International Coalition. Although both Bin Ladin and his depute Zawahiri remained at large, the organization’s internal structure was severely damaged and its communications and financial channels were effectively frozen after the War against Terror.  It is because any entity, such as, organizations, tribes, ethnic groups, et cetera that constitute confederacy or loose alliances have their own local goals along with common political objectives sought by the central authority. Confederacy fragments, when local goals, that are vital for any subordinate group’s survival, contradict central authority’s political doctrine.

Such contradictions become manifest, particularly after central authority suffers heavy casualties or becomes unable to continue delivering financial assistance to its subjects.  Thus, Al-Qaeda’s ever-loosening control over its subordinates became more and more nominal after the massive hunt directed by the U.S. Later, this weakness was cunningly exploited by ISIL.

Characteristics that distinguish ISIL from Al-Qaeda are obvious and come easily to the notice of ordinary citizens: ISIL is more brutal, more ruthless and far more ambitious. Both such currently incomparable brutality and ambitiousness are justified by its ideology and defined by its political goals. Initially, the ideology of ISIL absolutely accorded Al-Qaeda’s religious and political doctrine like its geopolitical aims.

However, these days – both ideology and political objectives of the ISIL differ from that of Al-Qaeda. ISIL and Al-Qaeda are tactically identical, ideologically different and politically separate with different contradicting objectives. Like Al-Qaeda, it is the geopolitical changes that can and does define ISIL total excommunication from its former leader brothers. Prior to and post 9/11 ISIL was an insignificant terror group, functioning under “Al-Qaeda” brand. Its ideology was inspired and, thus, indoctrinated by Al-Qaeda’s ideological core. But, after Iraqi dictator Saddam Hussein was overthrown, everything has changed to ISIL’s favor.

To understand why such a huge change happened and what mechanisms stand behind this power shift, we should look back at the history of Middle East. The Middle East is commonly seen as a central point of conflicts among Islamic, Christian and Jewish civilizations. Indeed, the Middle East was. But, the impact of  such conflicts was not instrumental in the formation and the development of ISIL. It is because not only have the Middle East become the hotbed of inter-religious conflicts, but also there formed significant inter-sectarian hatred and wars: Sunni-Shia rivalry.

After the fall of Saddam’s regime, Sunni-dominated Baath Party was replaced with a new Shia-dominated cabinet by the USA.  New government initiated series of repressions against Sunni population, which led to their hatred towards Shia. In such a political picture of events, ISIL found itself in front of an option: It would have either change its ideology, having it made appealing to outraged Sunnis and, thereby, increase the number of recruits, or would follow Al-Qaeda’s mainstream pan-islamist and relatively soft jihadi salafist ideology and act accordingly.

The latter option would case ISIL  to remain as an insignificant band, because pan-islamism and relatively moderate salafism  (which considered jihad against Crusades and their “puppet” rulers only and opposed massacring ordinary Shia civilians) were not in accordance with Iraq’s then-political situation. In other words, Al-Qaeda’s main doctrine began contradicting ISIL’s local political objectives. One of the founding fathers of ISIL, Abu Musab Zarqawi wrote a letter to Al-Qaeda’s depute-leader Ayman Az-Zawahiri, asking to issue a fatwa (religious permission) on “embarking a new campaign against Shia infidels”. In fact, it was the request of permission to begin a sectarian war, which would harm Al-Qaeda’s reputation on global level. That is why Zarqawi was rejected. However, he reluctantly followed his own decision and began large-scale attacks in Shia majority regions. It was this difference in vision, which had initiated ideological split in global jihad. At this point, ISIL’s ideology was changed from jihadi salafism to purely jihadi  takfirism.

Unlike Al-Qaeda, ISIL can also be characterized and distinguished by Arab nationalism and apocalypticism, both of which has been imported to the organization’s ideology under the influence of geopolitical  conditions and as a purely political maneuver.  After both the collapse of Saddam’s regime and the beginning of Syrian Civil War, ISIL heavily relied on local tribes to hire more recruits, because it did not have sufficient funds to attract foreign jihadists. Many of such potential local recruits were ex-Baathists, who had served at Iraqi army during Saddam’s rule and were expelled from their posts after the occupation of Iraq. Most of these ex-officers loyally adhered to Arab nationalism that Baath Party promoted in the course of its dominance. To achieve stable flow of such potential recruits, ISIL should have not only been anti-shia, but also, more nationalist.

This move has worked and was also proven to be decisive in ISIL’s gaining upper hand in its struggle against Western-backed Syrian rebel groups and Kurdish forces as well as Iran-backed Hizbullah. And then the time came which ISIL had been bidding: to denounce its former sponsor – Al-Qaeda for the past time rejection.  ISIL used apocalypticism as an ideological tool to achieve this objective. The leader of ISIL began to be propagated as a Muslim caliph, who is from the Prophet Mohammed’s own bloodline and, thus, the only legitimate ruler of Muslims worldwide.  He was advertised as “the Commander of the Faithful” who leads Muslims against global apocalyptic war against infidels, which had been mentioned in the Prophet’s narrations. Therefore, Al-Qaeda’s legitimacy started to have been viewed with more and more skepticism among jihadists and its ideological reputation began suffering heavily. The new era of  global jihad have just began…

Something that future holds

It is difficult to accurately predict who ISIL and Al-Qaeda will react to political events in the future. But, given that ISIL’s foothold in Iraq and Syria were severely weakened since the past two or three years, the group is highly likely to try to internationalize its ideology in the long run to secure its existence. To achieve this goal, the organization is likely to take multi-faceted approach to propagate its views. It will probably customize the elements of its ideology with specific objectives for different target groups. There is also a strong chance that the main goal of Al-Qaeda’s propaganda will be to focus on elaborating counter-arguments against ISIL.